Learning and earning stay ahead of technological change

Equipping people to stay ahead of technological change

It is easy to say that people need to keep learning throughout their careers. The practicalities are daunting 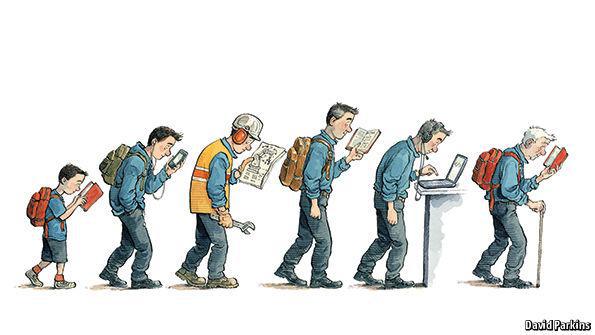 From the economist magazine

WHEN education fails to keep pace with technology, the result is inequality. Without the skills to stay useful as innovations arrive, workers suffer—and if enough of them fall behind, society starts to fall apart. That fundamental insight seized reformers in the Industrial Revolution, heralding state-funded universal schooling. Later, automation in factories and offices called forth a surge in college graduates. The combination of education and innovation, spread over decades, led to a remarkable flowering of prosperity.

Today robotics and artificial intelligence call for another education revolution. This time, however, working lives are so lengthy and so fast-changing that simply cramming more schooling in at the start is not enough. People must also be able to acquire new skills throughout their careers.

Unfortunately, as our special report in this issue sets out, the lifelong learning that exists today mainly benefits high achievers—and is therefore more likely to exacerbate inequality than diminish it. If 21st-century economies are not to create a massive underclass, policymakers urgently need to work out how to help all their citizens learn while they earn. So far, their ambition has fallen pitifully short.

The classic model of education—a burst at the start and top-ups through company training—is breaking down. One reason is the need for new, and constantly updated, skills. Manufacturing increasingly calls for brain work rather than metal-bashing. The share of the American workforce employed in routine office jobs declined from 25.5% to 21% between 1996 and 2015. The single, stable career has gone the way of the Rolodex.

Pushing people into ever-higher levels of formal education at the start of their lives is not the way to cope. Just 16% of Americans think that a four-year college degree prepares students very well for a good job. Although a vocational education promises that vital first hire, those with specialised training tend to withdraw from the labour force earlier than those with general education—perhaps because they are less adaptable.

At the same time on-the-job training is shrinking. In America and Britain it has fallen by roughly half in the past two decades. Self-employment is spreading, leaving more people to take responsibility for their own skills. Taking time out later in life to pursue a formal qualification is an option, but it costs money and most colleges are geared towards youngsters.

The market is innovating to enable workers to learn and earn in new ways. Providers from General Assembly to Pluralsight are building businesses on the promise of boosting and rebooting careers. Massive open online courses (MOOCs) have veered away from lectures on Plato or black holes in favour of courses that make their students more employable. At Udacity and Coursera self-improvers pay for cheap, short programmes that bestow “microcredentials” and “nanodegrees” in, say, self-driving cars or the Android operating system. By offering degrees online, universities are making it easier for professionals to burnish their skills. A single master’s programme from Georgia Tech could expand the annual output of computer-science master’s degrees in America by close to 10%.

Such efforts demonstrate how to interleave careers and learning. But left to its own devices, this nascent market will mainly serve those who already have advantages. It is easier to learn later in life if you enjoyed the classroom first time around: about 80% of the learners on Coursera already have degrees. Online learning requires some IT literacy, yet one in four adults in the OECD has no or limited experience of computers. Skills atrophy unless they are used, but many low-end jobs give workers little chance to practise them.

If new ways of learning are to help those who need them most, policymakers should be aiming for something far more radical. Because education is a public good whose benefits spill over to all of society, governments have a vital role to play—not just by spending more, but also by spending wisely.

Lifelong learning starts at school. As a rule, education should not be narrowly vocational. The curriculum needs to teach children how to study and think. A focus on “metacognition” will make them better at picking up skills later in life.

But the biggest change is to make adult learning routinely accessible to all. One way is for citizens to receive vouchers that they can

use to pay for training. Singapore has such “individual learning accounts”; it has given money to everyone over 25 to spend on courses from 500 approved providers. So far each citizen has only a few hundred dollars, but it is early days.

Courses paid for by taxpayers risk being wasteful. But industry can help by steering people towards the skills it wants and by working with MOOCs and colleges to design courses that are relevant. Companies can also encourage their staff to learn. AT&T, a telecoms firm which wants to equip its workforce with digital skills, spends $30m a year on reimbursing employees’ tuition costs. Trade unions can play a useful role as organisers of lifelong learning, particularly for those—workers in small firms or the self-employed—for whom company-provided training is unlikely. A union-run training programme in Britain has support from political parties on the right and left.

To make all this training worthwhile, governments need to slash the licensing requirements and other barriers that make it hard for newcomers to enter occupations. Rather than asking for 300 hours’ practice to qualify to wash hair, for instance, the state of Tennessee should let hairdressers decide for themselves who is the best person to hire.

Not everyone will successfully navigate the shifting jobs market. Those most at risk of technological disruption are men in blue-collar jobs, many of whom reject taking less “masculine” roles in fast-growing areas such as health care. But to keep the numbers of those left behind to a minimum, all adults must have access to flexible, affordable training. The 19th and 20th centuries saw stunning advances in education. That should be the scale of the ambition today.